In 1987 Dakin Inc., toy company released a toy spider doorknob cover that seemed to be styled heavily from the Garbage Pail Kids.  The toys were black and white.  The white areas of the toy glow in the dark.  The bottom of the spider was cut so it could be slid over a doorknob.  The toys are made out of a think semi-flexible plastic.  The dimensions are approximately 5″ x 5″ x 3.5″.

They type of packaging the toys came in is unknown.  The only known figures are the spiders but there may be other characters as well.  The spiders have been known to be found in pairs. 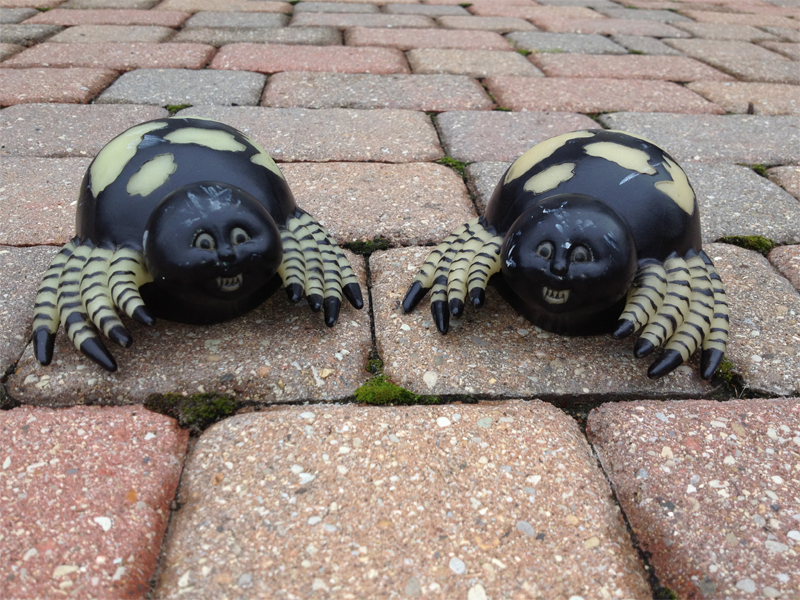 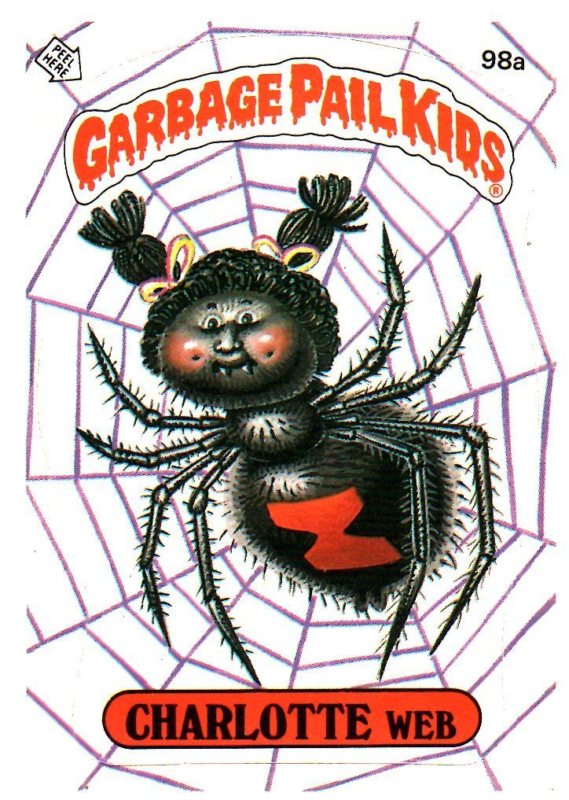 Was the Dakin toy stolen from this Garbage Pail Kid? You be the judge!

Garbage Pail Kids Cheap toys were introduced in 1986.  The toys were small plastic / rubber figures.  They were sold with “crummy candy” in a small green plastic “garbage bag.”  The bag also included a checklist. 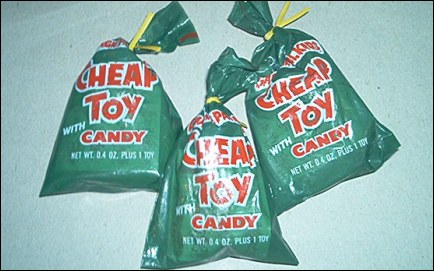 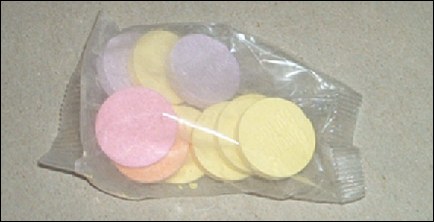 There were two series of Cheap toys.  Each series included 10 figures.  The toys came in a wide array of colors.  Some colors were more rare than others.

Below is a complete collection of Garbage Pail Kids Cheap Toy Figures.  The top row is the 1st series.  The bottom row is the 2nd series. 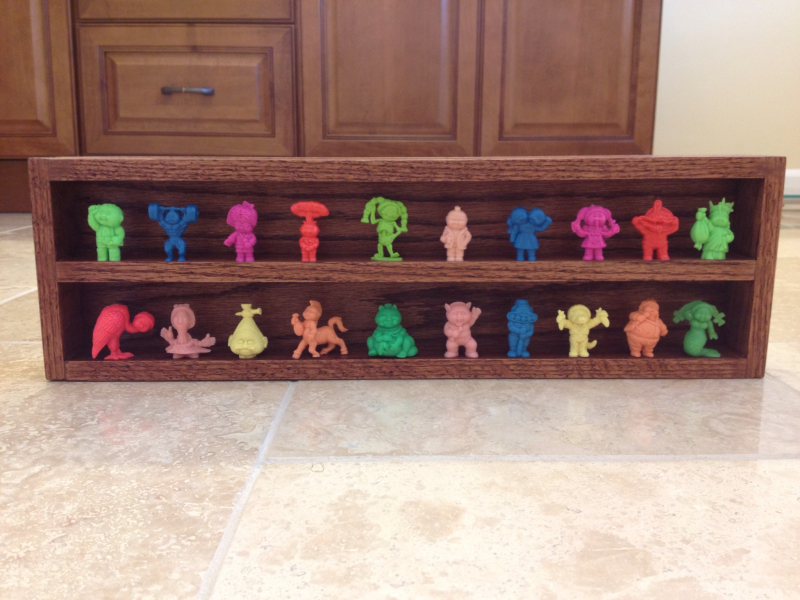 There is much much more to learn about Garbage Pail Kids Cheap Toys.  You can learn a lot at GPKUG.  The godfather of cheap toys goes by the name Rusvan on GPKUG.  He knows everything there is to know about cheap toys.

There have been some people making custom Garbage Pail Kids Cheap Toys.  Some of the custom cheap toys are the exact same sculptures as the original cheap toys.  The custom toy designers have also made GPK cheap toy figures that Topps did not release in back in the 80s or created variations of characters from the 80s. 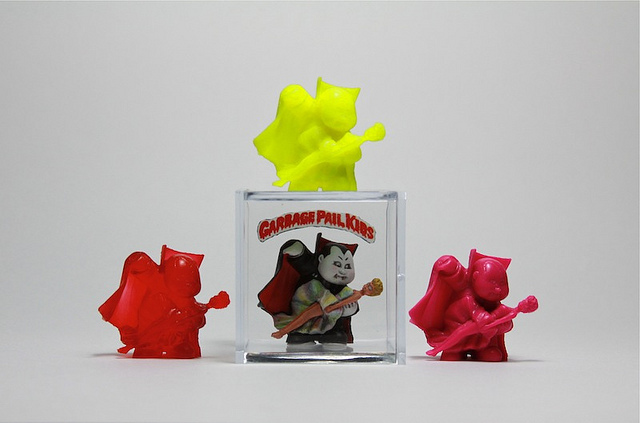 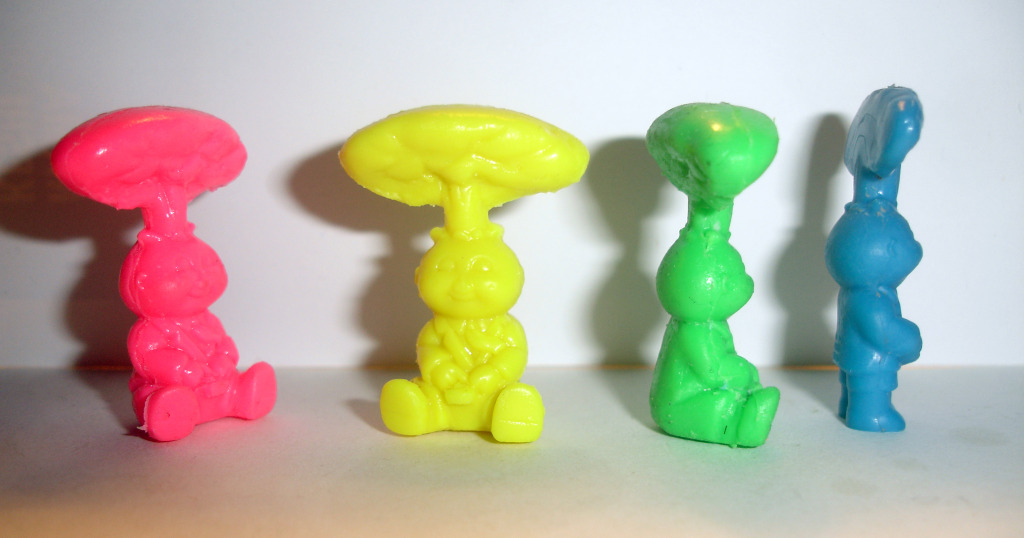 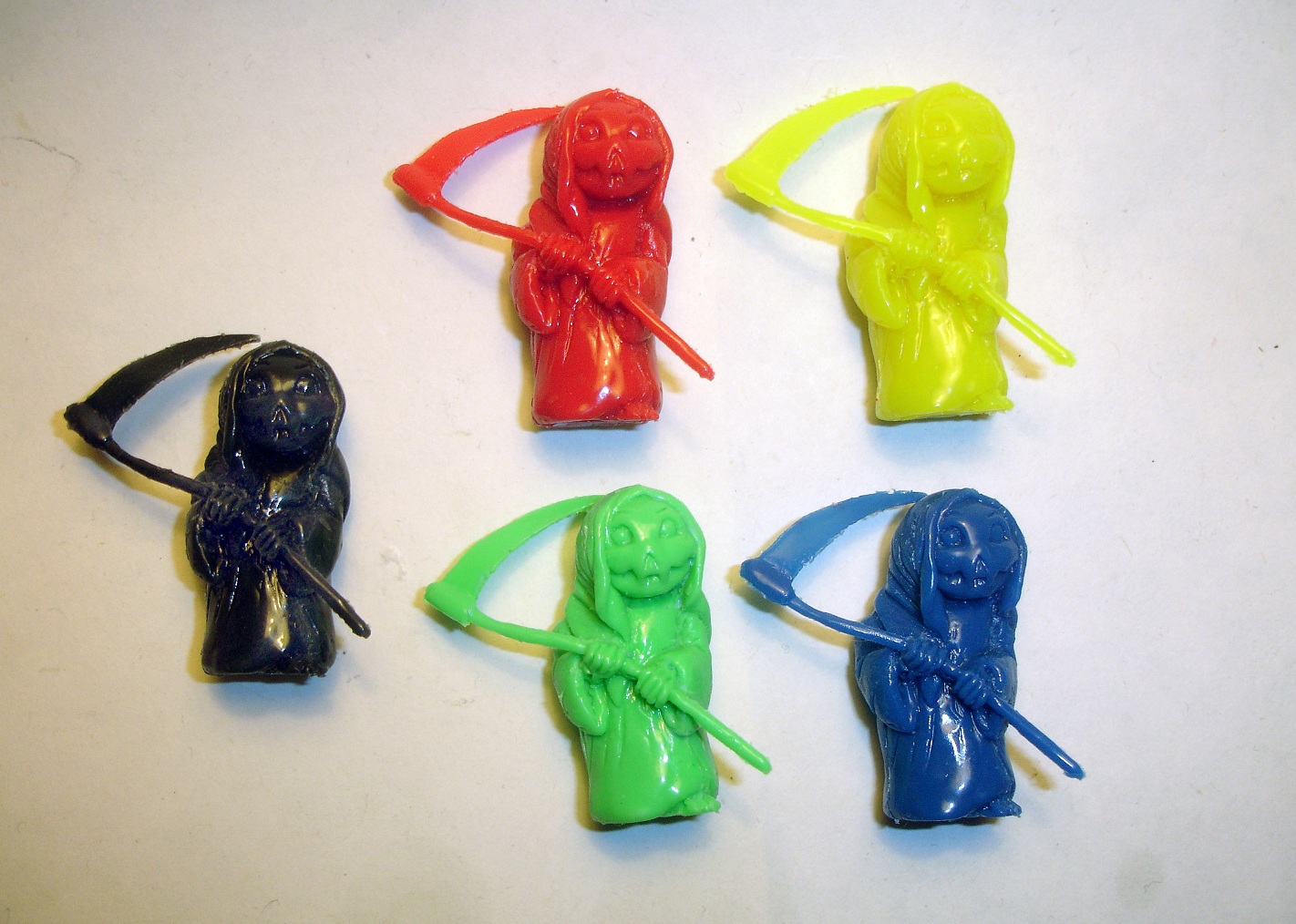 The process of creating a Garbage Pail Kids card had many steps.  First the artist would come up with a concept or use somebody else’s concept and start sketching.  They would create pencil sketches and color rough art of the characters.  At some point during the process, the people at Topps would approve the character and the artist would create a final painting.  The final painting would be used to create the card image. 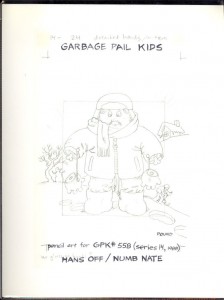 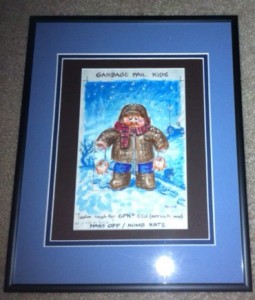 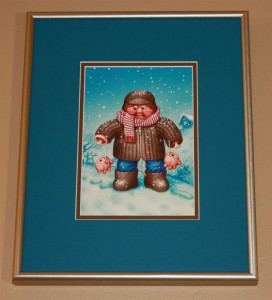 If you have any Garbage Pail Kids Final Art for sale or trade please contact me at gpkblog@gmail.com.

Tribute to a hot chick in Garbage Pail Kids auctions

In early 2011, spanning a time frame of approximately two months, eBay seller ‘nakedrabbits’ listed a large amount of Garbage Pail Kids on eBay.  At any one time there are approximately 15-18,000 listed on eBay for the search term Garbage Pail Kids. To make his auctions stand out, nakedrabbits used a hot chick to model the items he put on eBay.  In my opinion this guy was a marketing genius.  Judge for yourself…

On eBay this nakedrabbits character has his location listed as ‘Behind the Zion Curtain, United States.’   In one of his auctions he listed a piece of Garbage Pail Kids Final Art and mentioned that it was framed by ‘Well Hung Framing‘ in Utah.  I don’t know what kind of weird $hit is going on in Utah but I have no problem with it as long as this chick is involved.

I have no idea if the use of  this model helped nakedrabbits get higher prices for his auctions but what I can tell you is I’m sure he got more watchers and page views.  This OS1 Garbage Pail Kids full sheet sold for $1724.99; worth every penny in my opinion:

April 13th 2011 was a sad day for GPK collectors, nakedrabbits and America as a whole.  All of nakedrabbits eBay auctions were pulled down for violating eBay’s terms of service.  I know this because I had his auctions saved in ‘My eBay’ and I received notice when they were pulled. I would like to know who the loser was that decided to complain?

Luckily we have Google cache and I was able to locate the following pictures. Now we can save them here forever. Lest we forget nakedrabbits, a true pioneer in Garbage Pail Kids eBay marketing. 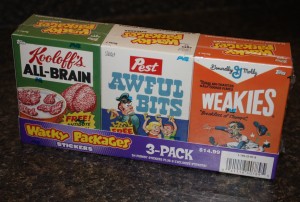 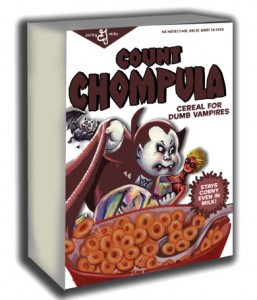 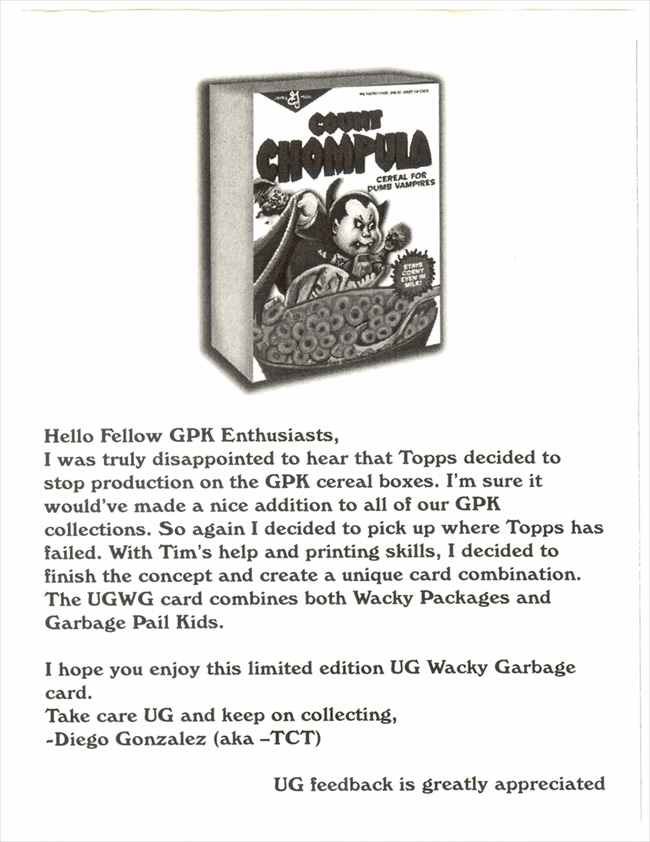 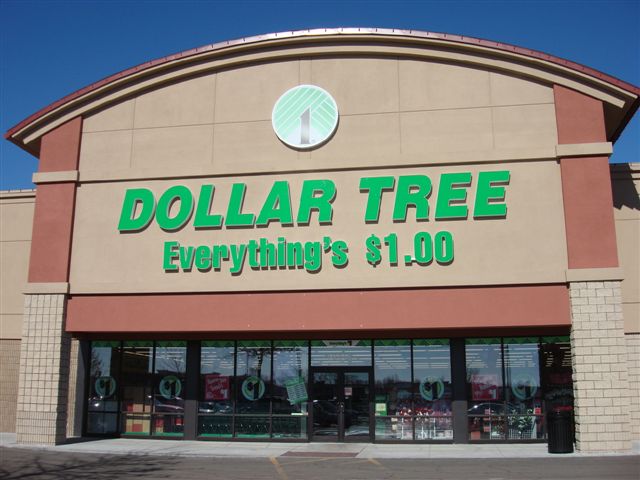 Dollar Tree stores have been stocking Garbage Pail Kids Flashback 2 Packs in their card sections.  How can this be you say?  Well since every item in the Dollar Tree store only costs $1, Topps has made special 4 card packs vice the 8 card regular retail and hobby packs.  Additionally, the 4 card GPK packs sold in Dollar Tree stores appear to only contain base cards, no parallels, sketch cards, printing plates or 3d cards.

As you can see in the below images, the Dollar Tree packs do not contain ratio information for parallels, sketch cards, etc.

Below is an opened Dollar Tree Pack 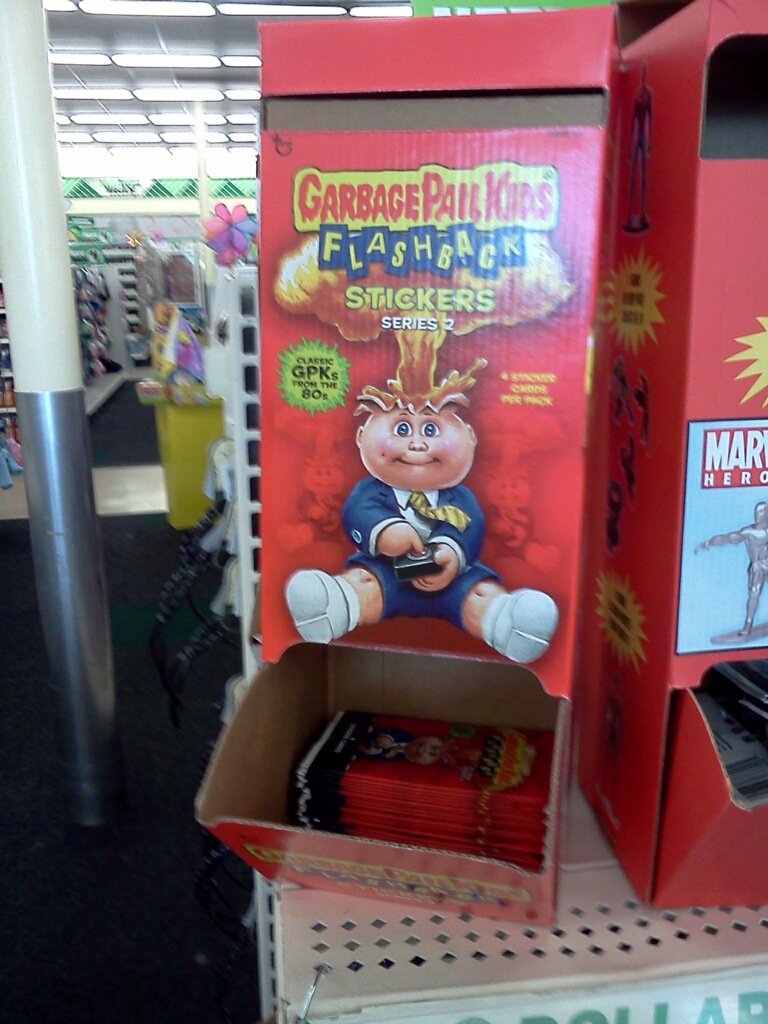 If you decide to head to a dollar tree in search of these lame 4 card base card packs then please be warned!  The class of people that you will find in these stores can be quite scary.  Additionally their card sections (like the rest of the stores) are unorganized and inconsistent from store to store. 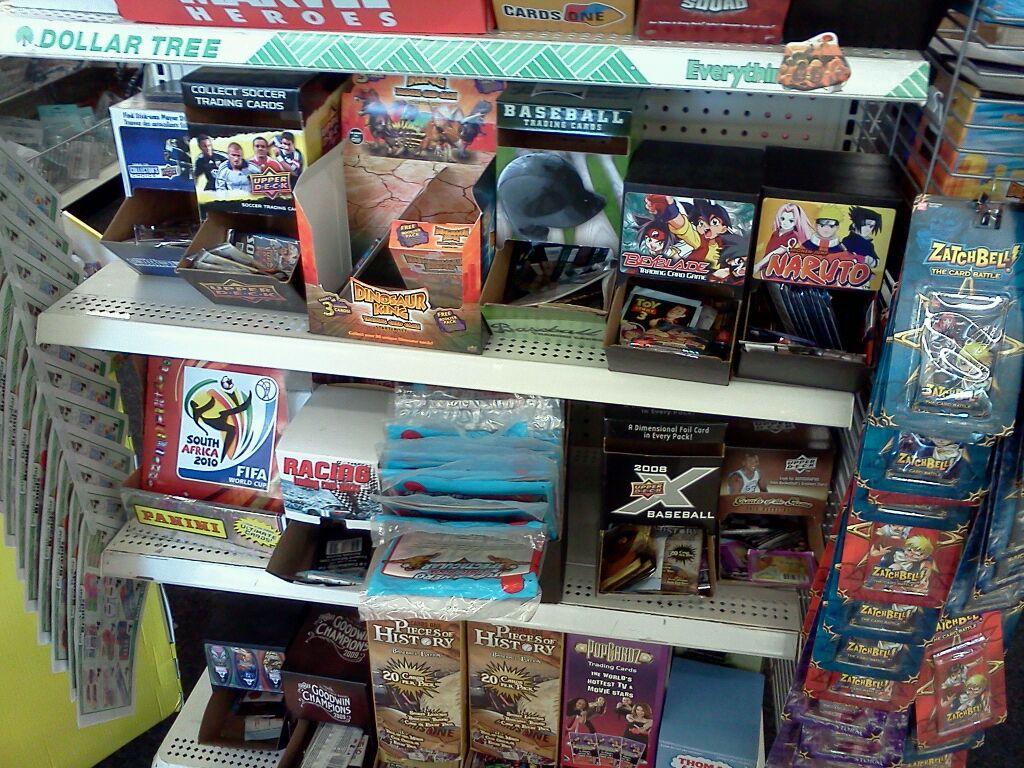 It has been said that Dollar Tree also carried 4 card Garbage Pail Kids Flashback 1 packs similar to the above packs. I have been unable to confirm this. If anybody has any information please post it up! 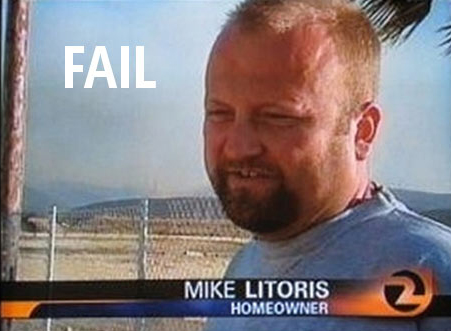 Topps released the Garbage Pail Kids Flashback 2 in late February 2010.  The GPK Flashback 2 release consists of mostly Original Series (OS) GPK cards reprinted with really ugly borders, a few Lost GPK cards (from the U.S. 16th Series that were never printed back in the 80s) and some Where Are They Now cards.  There is also an Adam Mania sub-set and a 3D sub-set of cards.

Apparently Topps did not spend a lot of time on quality control with the new GPK FB2 release as they had a huge mistake that should have been caught before hundreds of thousands of cards were printed and sold to collectors.

Lets start with a review… (For Topps sake)
This is the OS2 Card #79; Sewer Sue / Michelle Muck:

Now here is what Topps printed up and sold to collectors in the GPK FB2 release:

I am pretty sure this is the individual that Topps hired to do quality control for the FB2 Release: 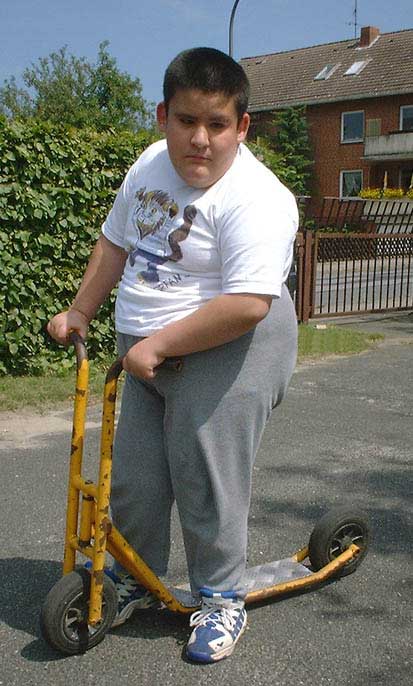 Contact Topps if you wish to express your dissatisfaction with their mistake! 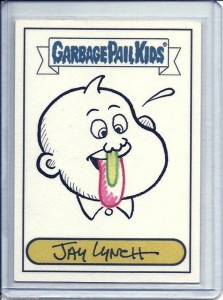 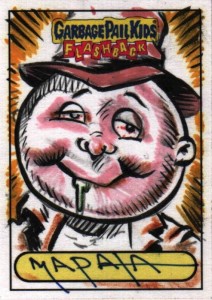 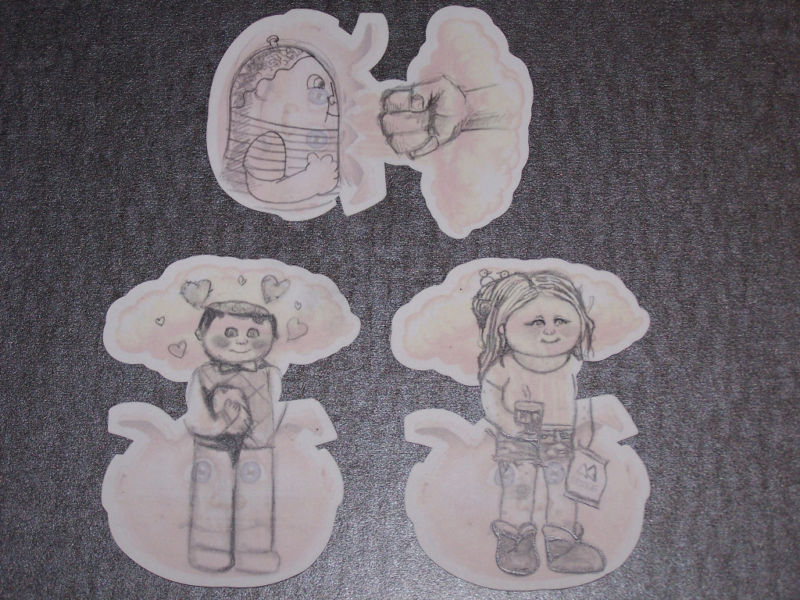 Adam Bomb is the most iconic Garbage Pail Kid of all time.  He graces the front of countless U.S. and Foreign packs/wrappers, boxes, posters, advertisement literature, etc.  Here I will post all of the U.S. and Foreign Adam Bomb cards that I can think of.  I am sure I am missing some so please let me know if you know of any other Adam Bomb cards. 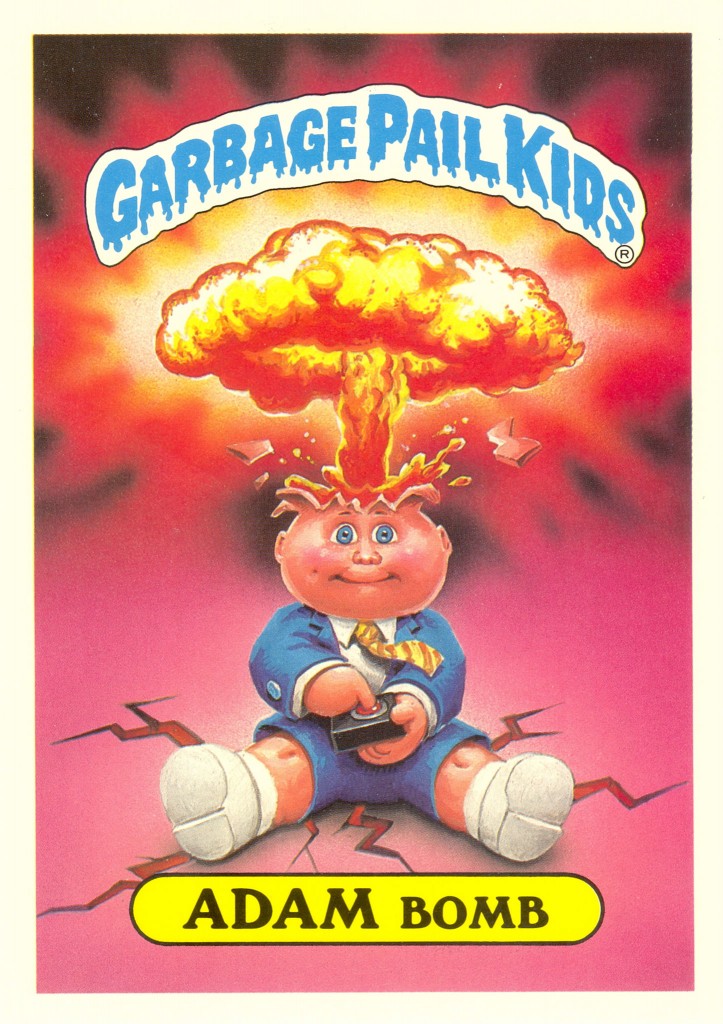 In 1986 44 card test sets were released in Europe.  These sets consisted of only ‘a’ cards.  The test sets were found in Germany, Denmark, Holland, France, Jordan and Belgium.  The cards were smaller than U.S. Garbage Pail Kids and measured approximately 2.125″ x 3″.

Below is the French and Spanish versions of Adam Bomb.  Both cards are from the 1st Series releases.  Both versions of the card are 2.5″ x 3.5″ which is the same size as the U.S. version.

Next we have a couple offerings from South America; Argentina’s Alex Plosivo and Brazil’s Rambo Bomba.  Both versions of the card are 2.5″ x 3.5″ which is the same size as the U.S. version.  Notice that the Basuritas card has a die cut while the Gang Do Lixo card does not.

Here are a couple of Argentine Adam Bombs from the Basuritas and Monsters release and an Adam Bomb from the Chile Solo Adam Bomb release.  All of these South American Garbage Pail Kids cards are quite small and printed on very thin paper.

A series called Holiday Sgorbions was also released in Italy.  This set contained two Adam Bombs.  The one on the left is the Metallic Adam Bomb and measures 2.1″ x 2.7″ The card on the right is the Adam Bomb Tattoo and measures 1.7″ x 2.4″.

The next two cards we have are the ANS Adam Bomb Releases from Argentina and Brazil.  At some point the Adam Bomb on a lot of the newer cards started looking more cartoonish than previous older versions.

Here are a couple of lesser known versions of Adam Bomb from Europe.  Both Sweden and Finland released ANS1 sets which included silver foil sub-sets.  The first card in each sub-set was an Adam Bomb.

Up next on the left is the Adam Bomb Alphabet card that was found in ANS5.  Back to ANS4 we also have an Adam Bomb Tattoo as seen on the right.

In the U.S. ANS4 release Topps did this card to commemorate the 20th Anniversary of the original Adam Bomb card printed in 1985.  On the right you see a Wacky Packages parody of Adam Bomb.

There was also a Garbage Pail Kids Where Are They Now (WATN) sub-set included in the 2010 Flashback release.  Of course Adam Bomb was featured in this sub-set.