This post will serve as a quick history of the GPK Fan Sets.  There are more in depth posts on some individual fan sets here on GPK Blog and on the GPKUG Forum.  The purpose of this blog post is to acquaint collectors with the Fan Sets so that if they become interested in collecting them, they know what to look for.

The Garbage Pail Kids Underground (GPKUG) Fan sets began in 2011.  There has been a total of 9 Fan Sets.

Fan Set 1 / FS1
Year of Release: 2011
Name: Koodakaneh Ashghaldan
Language: Persian Farsi / Iran
Number of cards: 80 Base Cards, 1 Promo Card, 1 Bonus Card
Extras:
1 Bonus Card (B1) Tiny Tim
1 Promo Card (P1) Adam Bomb – Limited to 10 produced
Number of sets produced: 47
Notes: At some point after FS1 shipped, another card featuring Travellin’ Travis was created.  The card was numbered x/100 and was sent to everyone that purchased a FS1.  Additional cards were sent to other GPK collectors.  Some unnumbered Travellin’ Travis cards also made it into circulation. 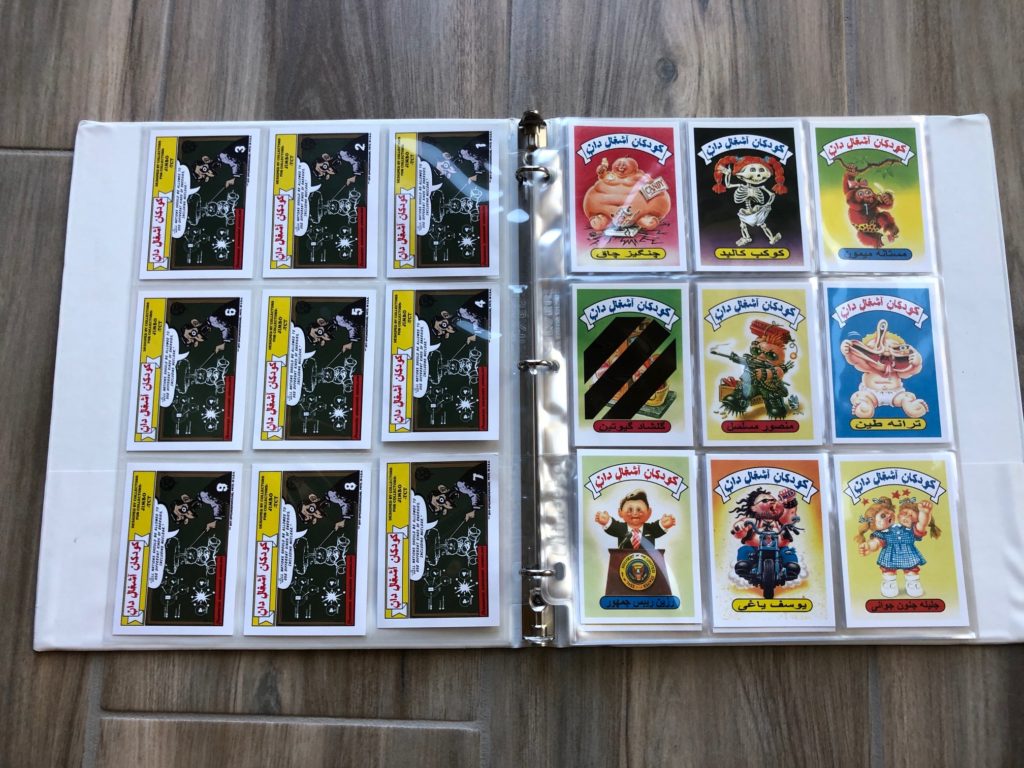 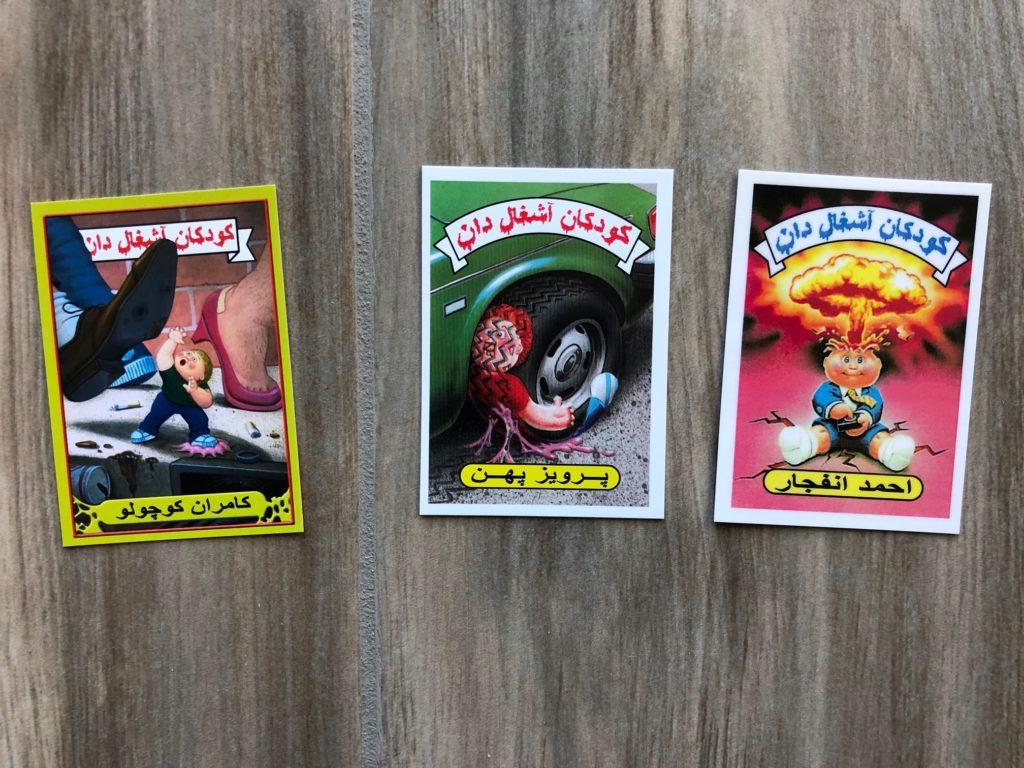 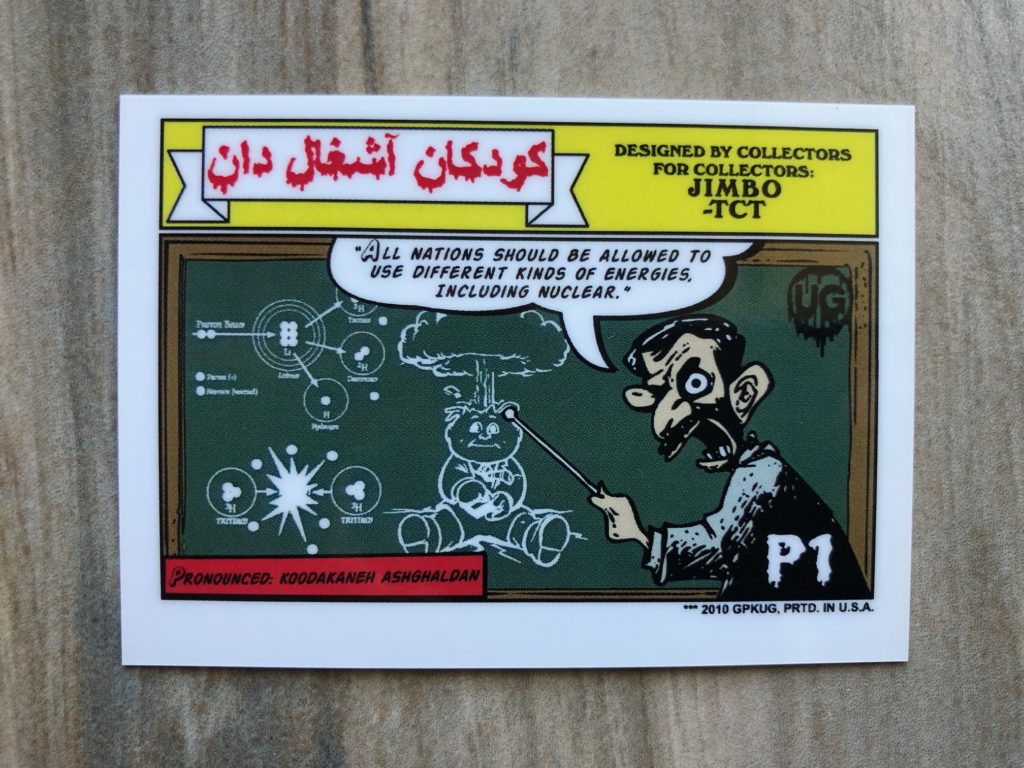 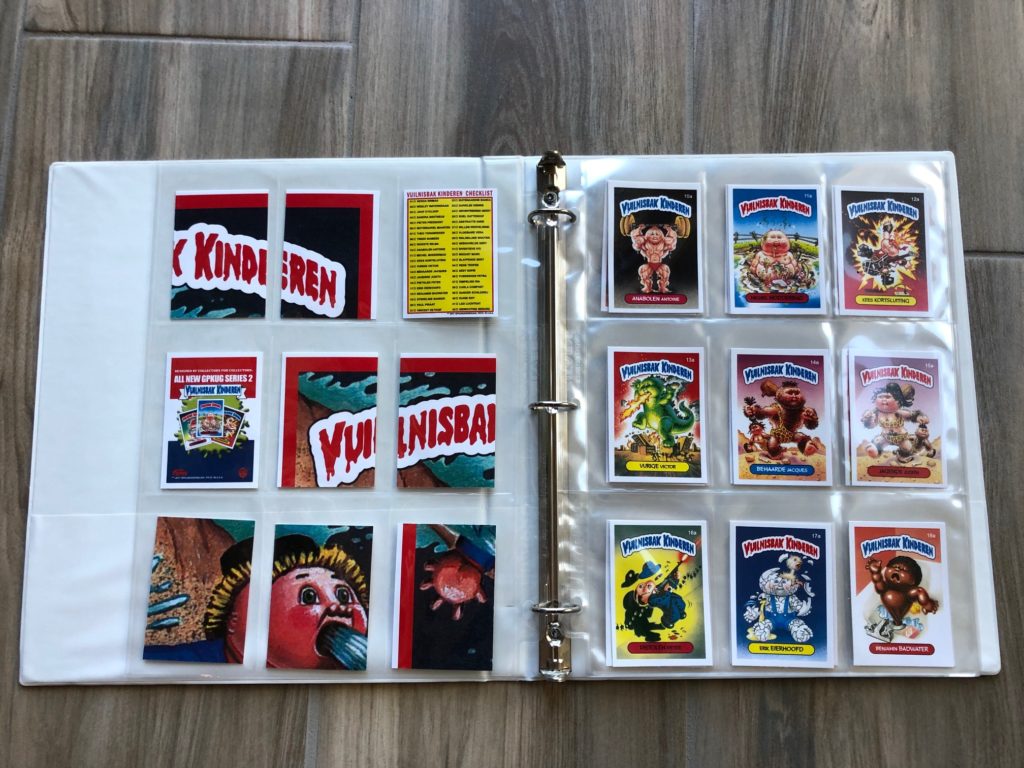 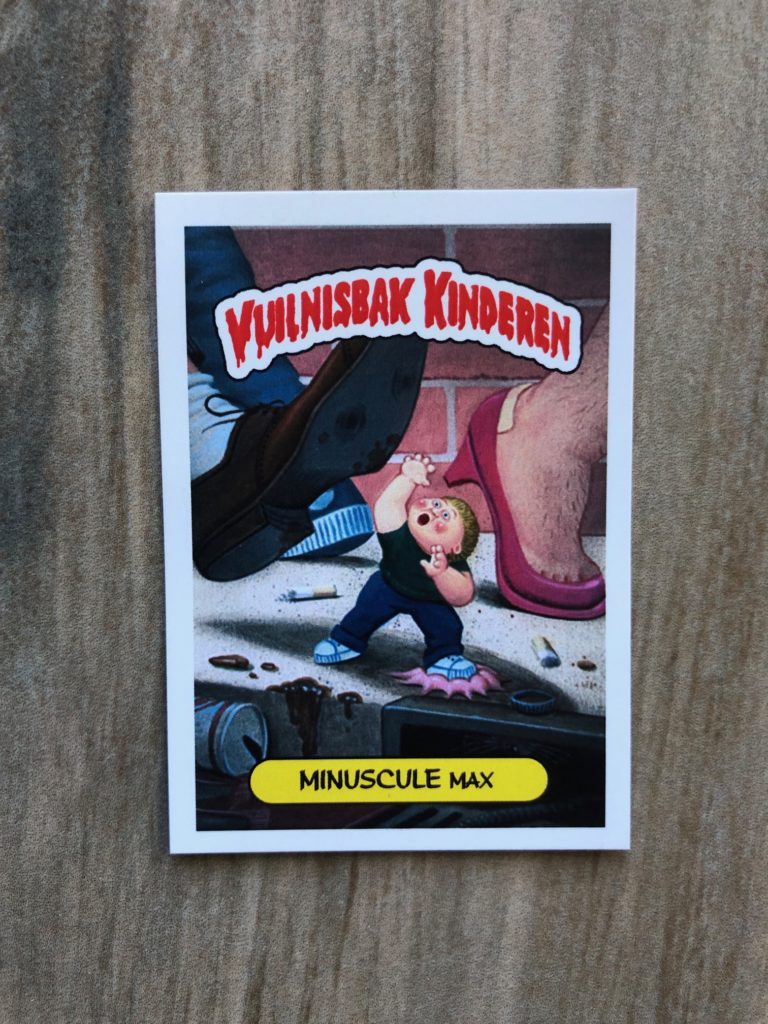 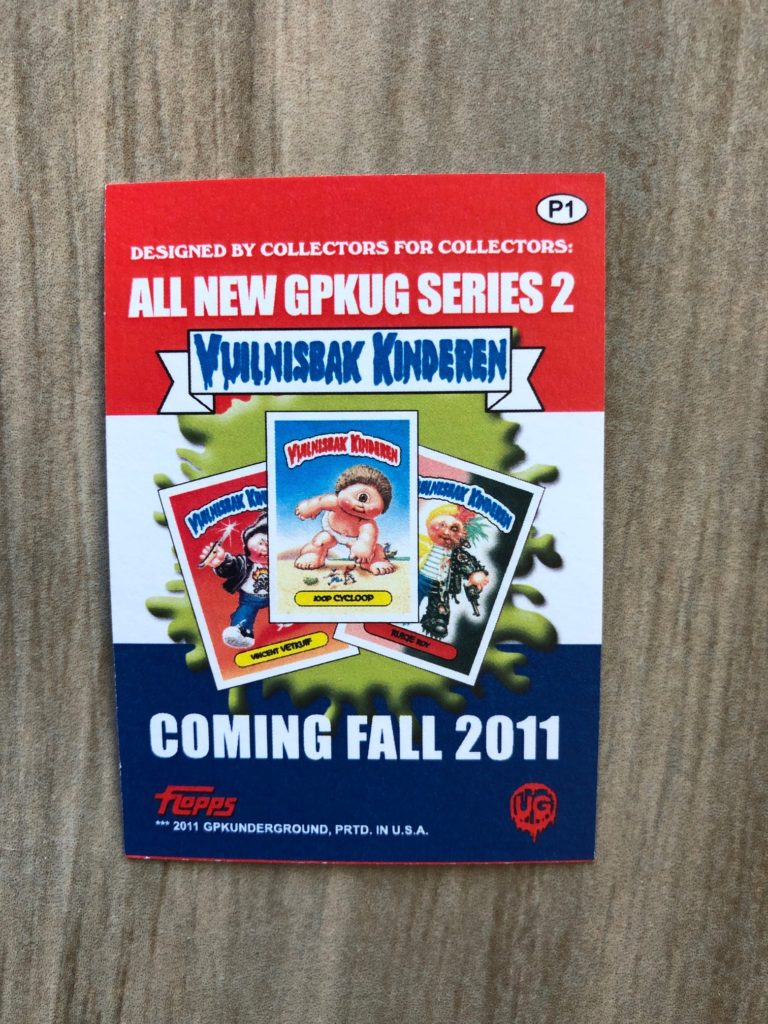 Fan Set 3 / FS3
Year of Release: 2012
Name: Kacara Balte Se Bacce
Language: Hindi / India
Number of cards: 20 Base Cards, 2 Promo Cards
Extras: 2 Promo Cards.  **Both Promo Cards featured Adam Bomb on the front.  The back of the first promo card was printed upside down so a second promo card was also produced.  Both types of promo cards are in circulation.
Number of sets produced: 200
Notes: Fan Set 3 was the first fan set to come wrapped in packs.  FS3 came wrapped in yellow wax packs.  A piece of “Final Art” was also produced by GPK Artist Dustin Graham for this set.  The character on the Final Art was the character on the wax packs. 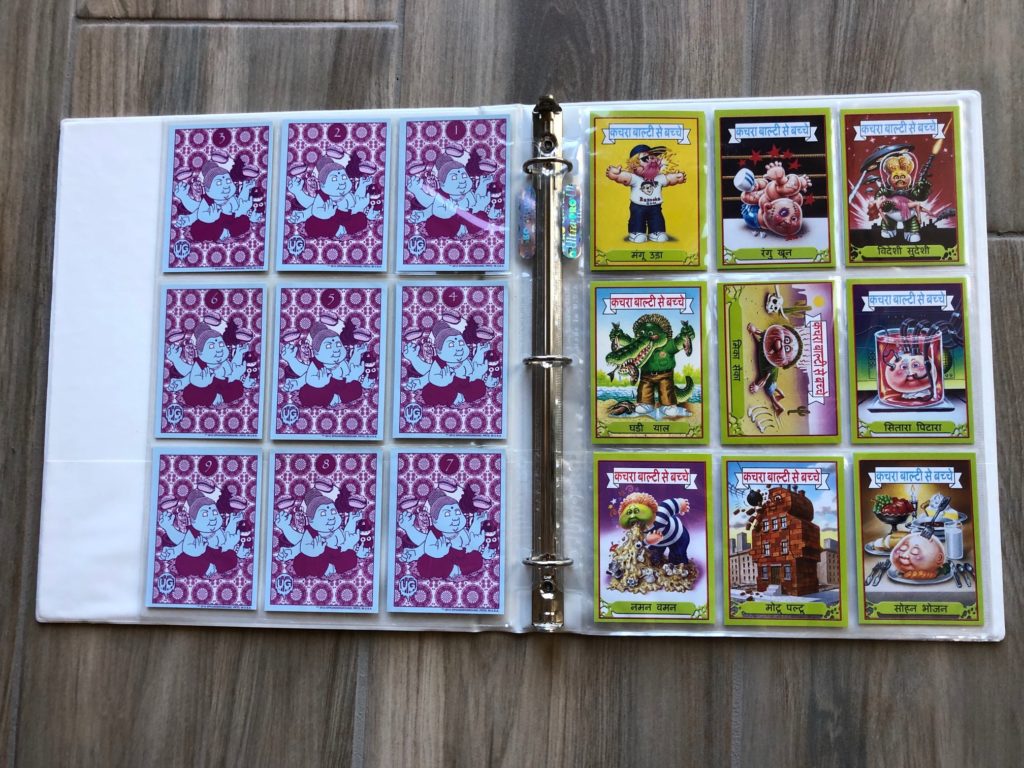 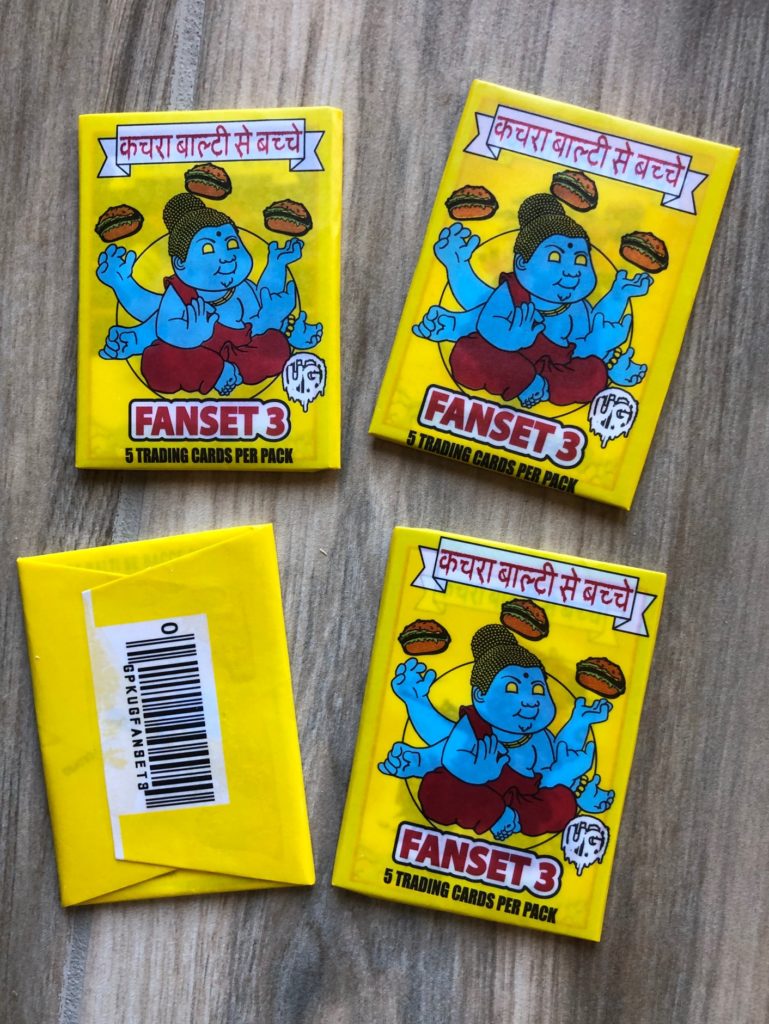 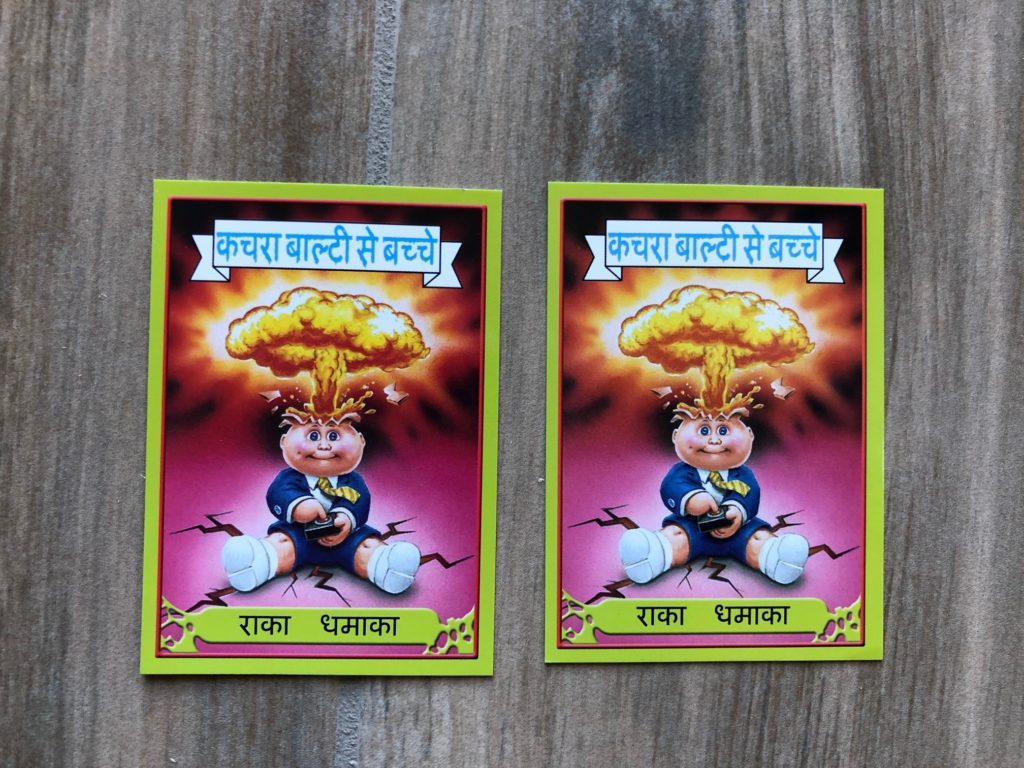 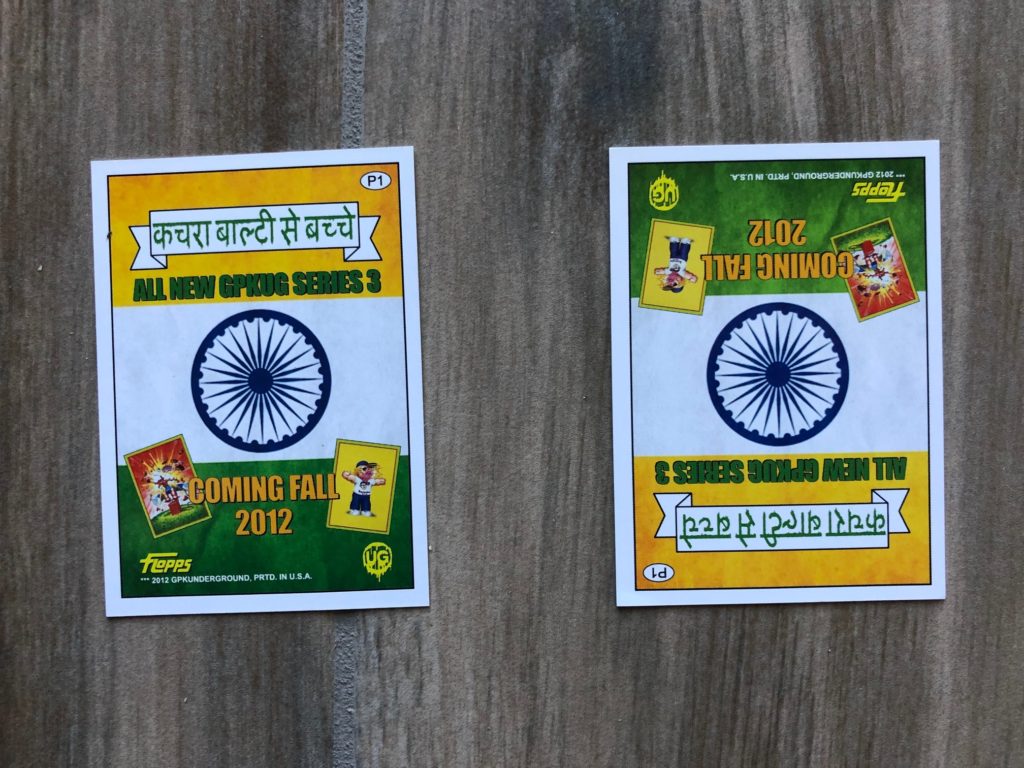 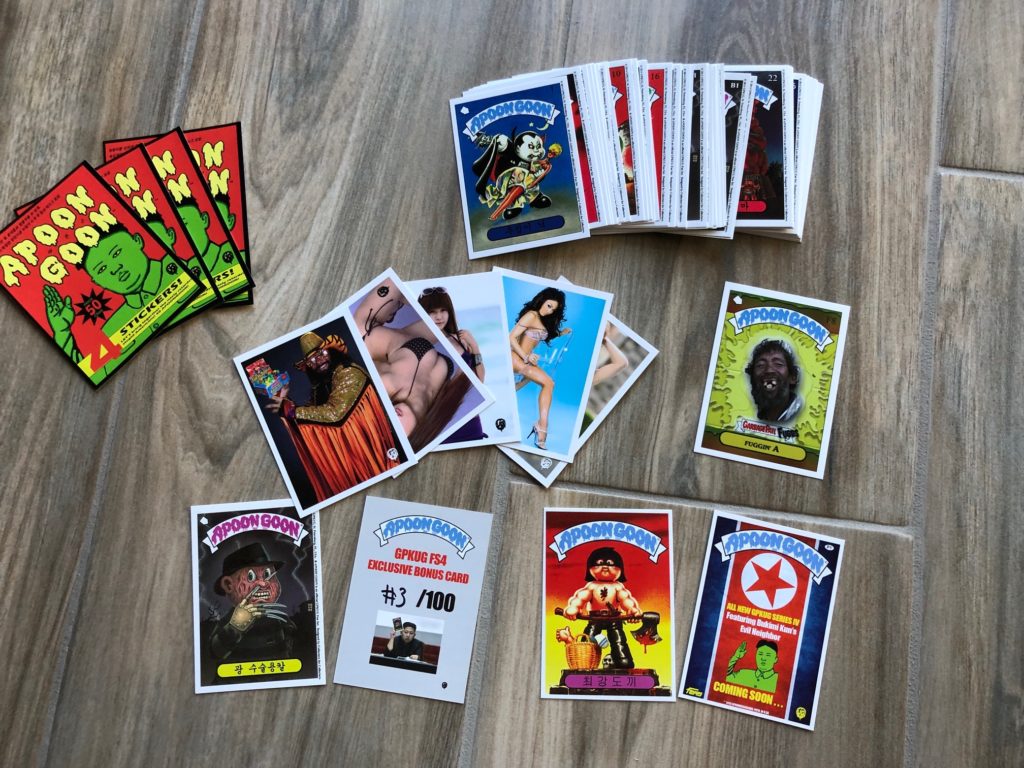 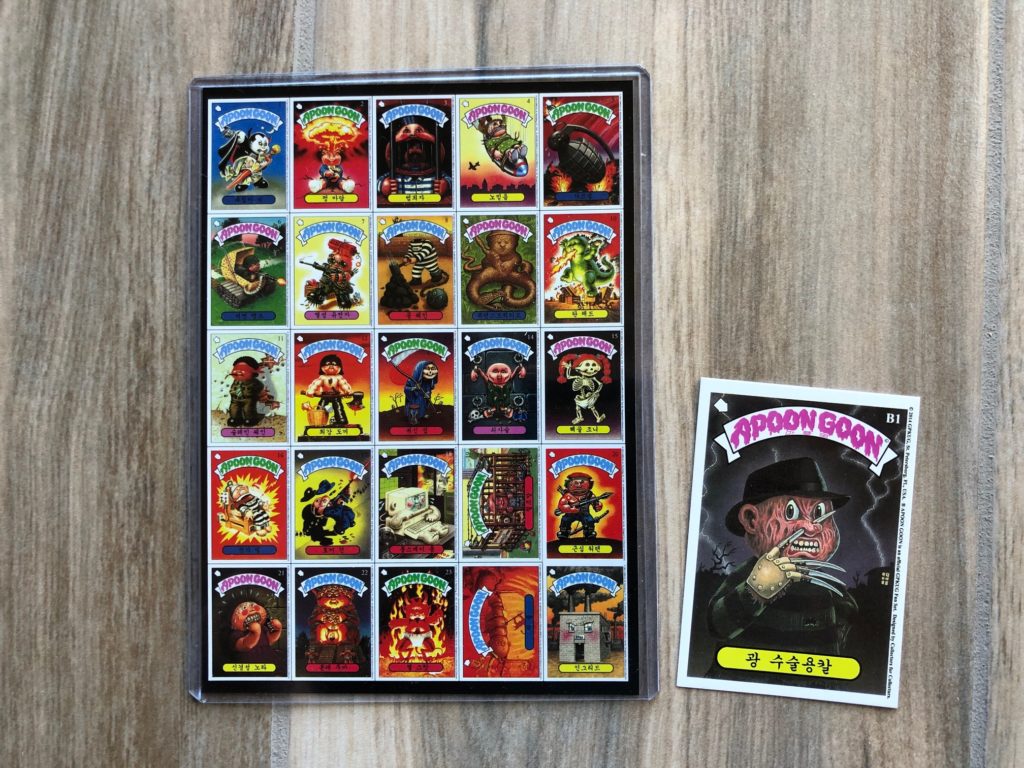 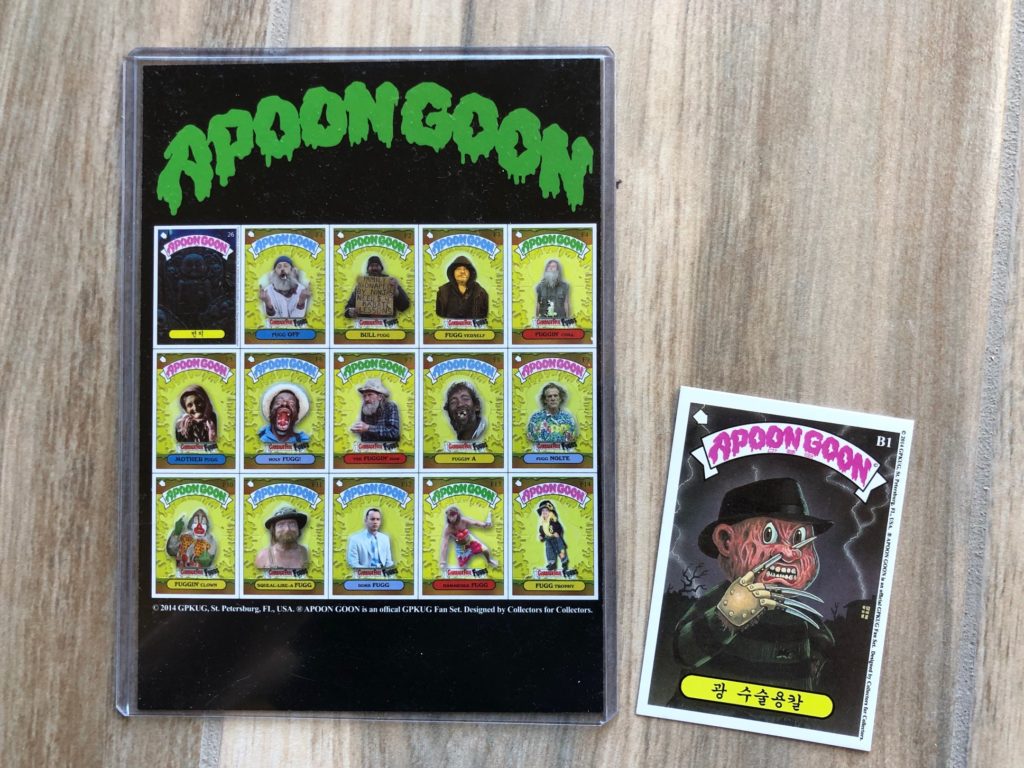 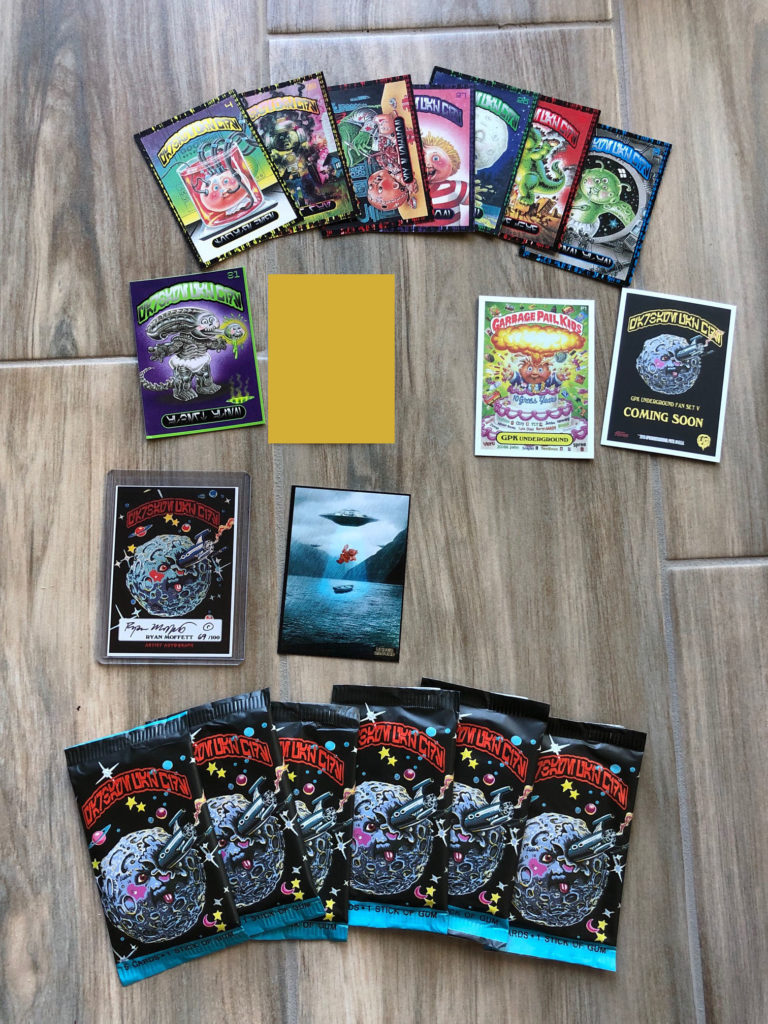 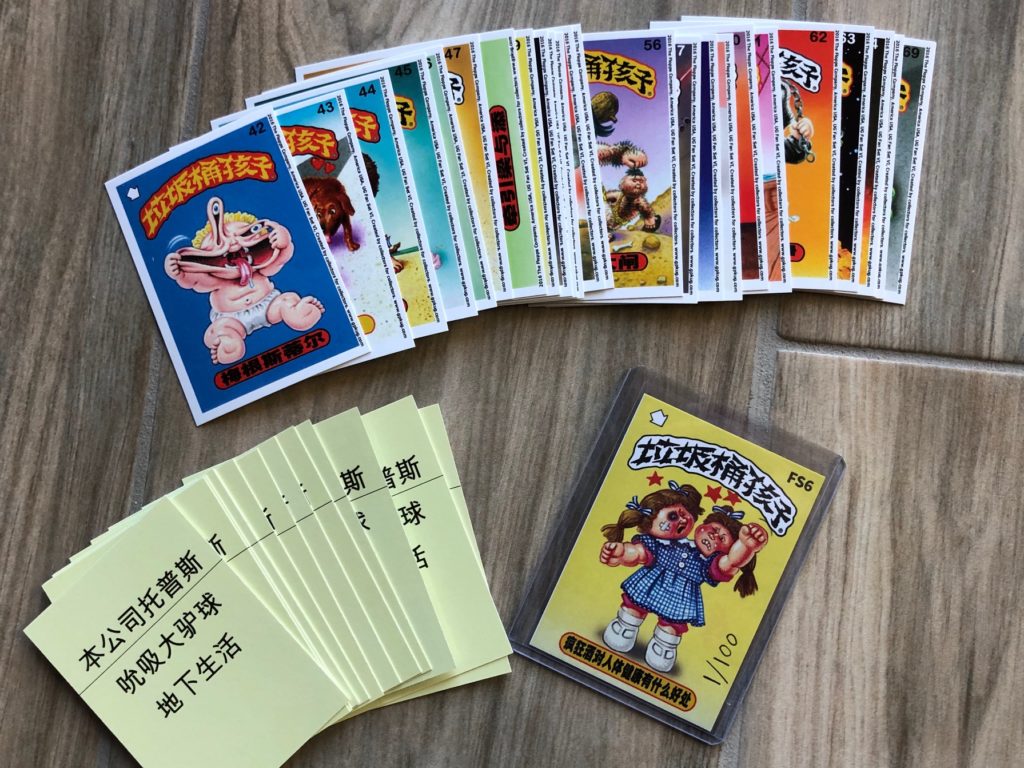 A strange thing happened after Fan Set 6.  Instead of being produced by the members of GPKUG, a mysterious group of individuals took over.  They started branding the Fan Sets as “Black Market Trading Company Fan Sets.”  Although the identities of individuals involved with the Black Market Trading Company are unknown, they have maintained the same high quality standards as the previous Fan Sets. 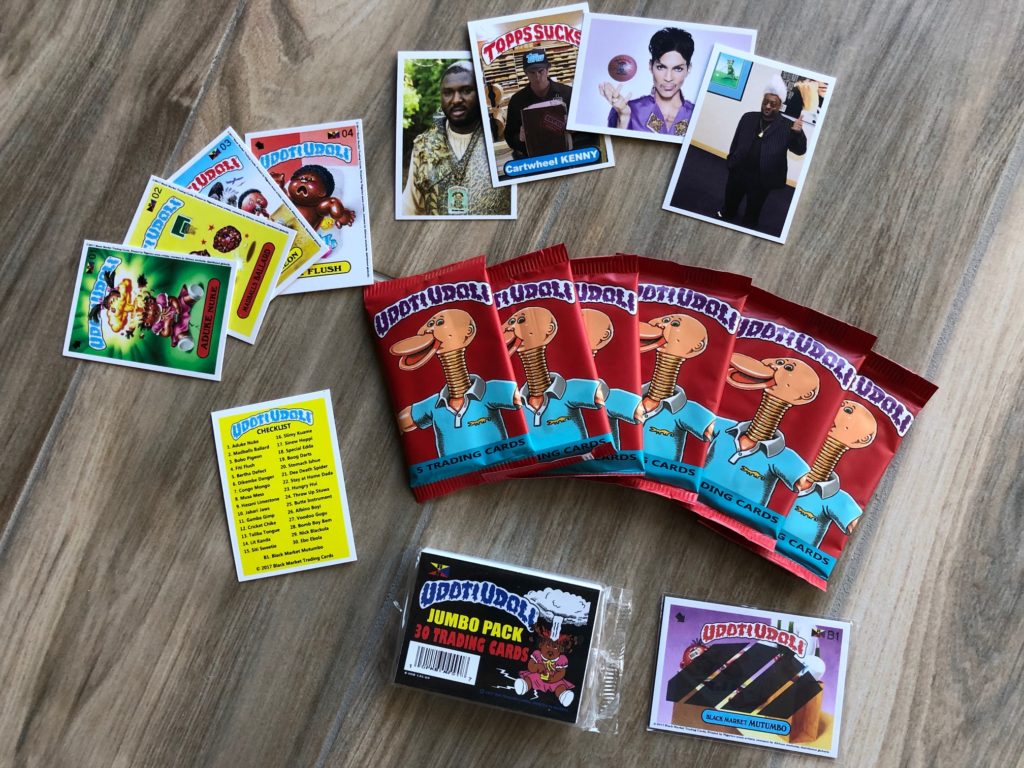 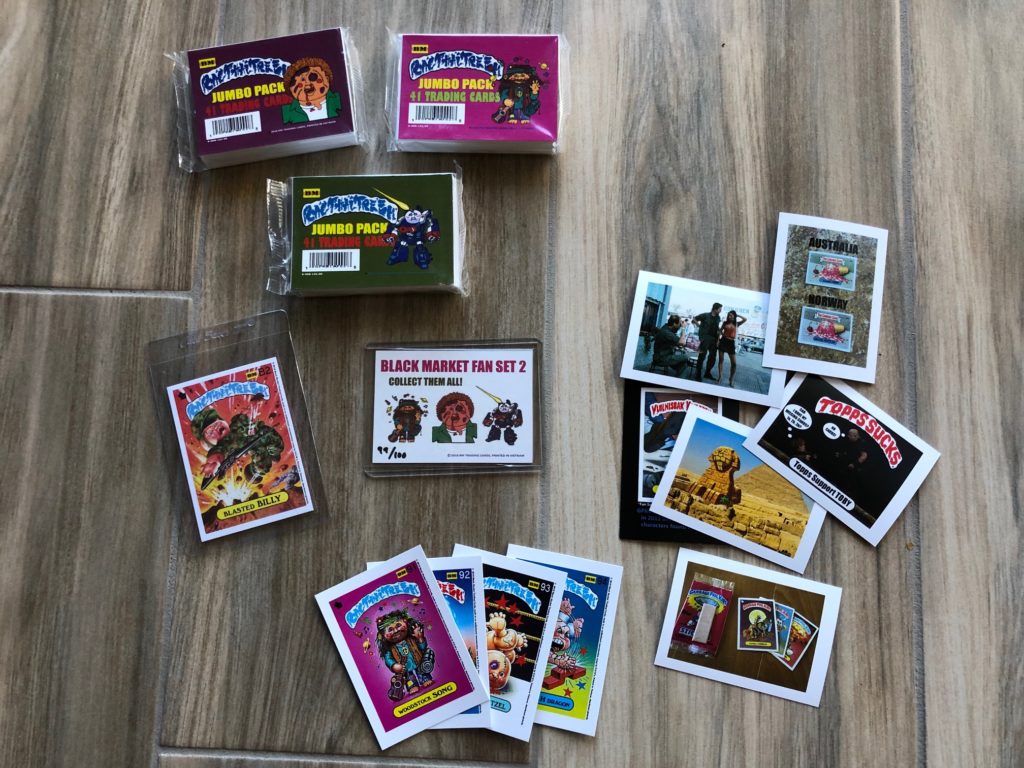 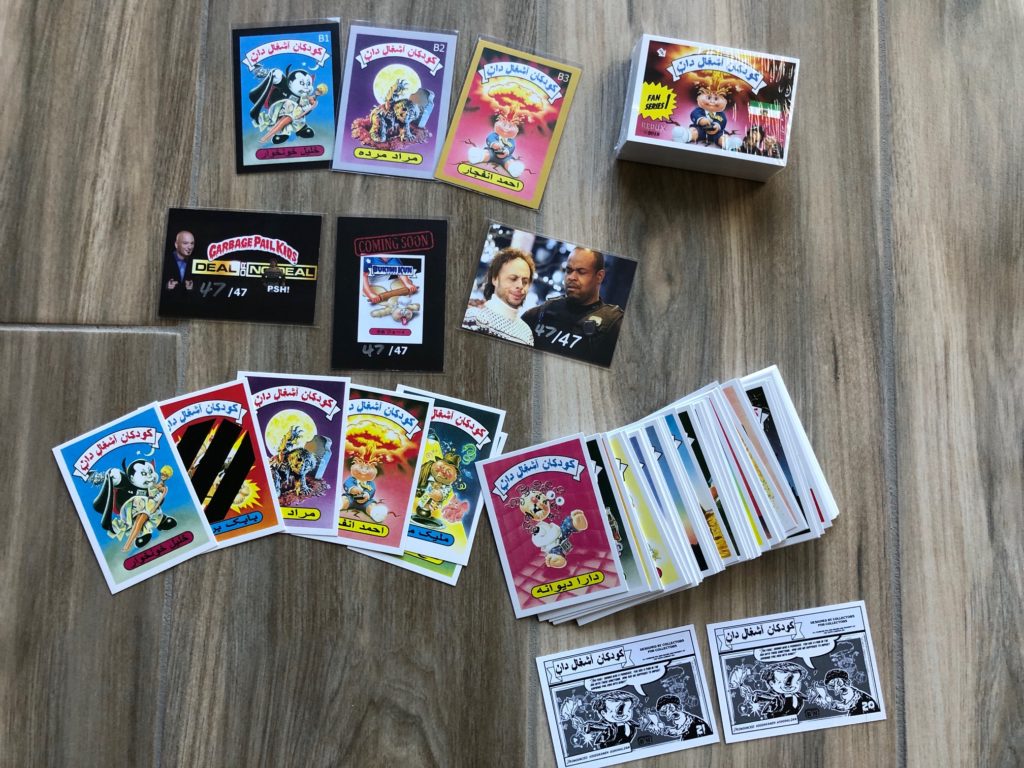 Bukimi Kun Series 2 contained all 209 cards (numbered 401-609) in the Israeli Havurat Hazevel Second series release along with 6 extra cards. The extra cards consisted of a P1 card of Dough Boyd (interestingly the only OS5 card not in Havurat Hazevel 2nd series), a censored No Number Semi Colin, and four additional censored cards.

Each set consists of 14 packs, 3 cards per pack for a complete 42 card set.  Each pack also contains gum.

Fan Set 13 / Black Market Prototype Sticker Set
Year of Release: July 2020
Language: English
Name: Prototype Sticker set
Number of cards: 6
Extras: n/a.
Number of Sets produced: 30
Notes: Black Market Trading Cards was attempting to product a chrome-style set of cards. These prototypes were ordered to see the various finishes. A minimum order of 30 cards of each style was in place. The sets were hand stamped with the Black Market logo on the reverse of each card. The finishes were Rainbow, Prism, Transparent, Brushed Aluminum, Sparkle, and Mirror.