In 2010/2011 several members from the Garbage Pail Kids Underground made a Persian Farsi Garbage Pail Kids Fan Set.  The members responsible were Jimbo, -TCT & tinyTIMMAH.  Jimbo & -TCT came up with the concept, -TCT was the art director and  tinyTIMMAH printed the release.  The set consisted of 81 cards; 80 base cards and 1 bonus card.  The set is numbered 1-80 and the bonus card is numbered B1.  The cards measure 2.5″ x 3.5″.  A total of 47 sets were printed.  The sets were primarily sold to other GPKUG members.  Purchase of the GPK Farsi set was limited to 1 per person.  The phonetic pronunciation of ‘Garbage Pail Kids’  in Farsi is ‘Koodakaneh Ashghaldan’.

The GPK Farsi Fan set has three different card backs; Standard Back (Cards 1-79), Checklist Back (Card 80) and the Bonus Back (Card B1).  -TCT came up with the concepts and did all the art for the back of the cards. 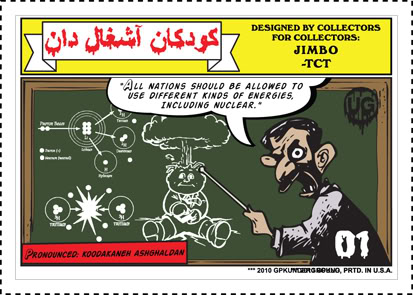 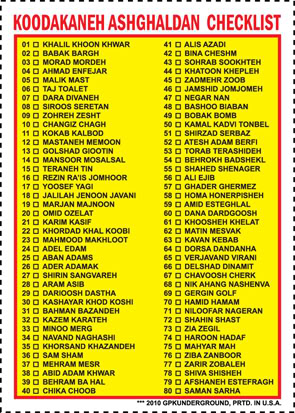 The Farsi GPK bonus card was added midway through the development process.   The bonus card was developed by -TCT to thank tinyTIMMAH for his hard work printing and cutting the set.  The bonus card was modeled after the UK ANS Sticker Set version of the Garbage Pail Kid Card 216a/b Tiny Tim/Small Saul.  Tiny Tim just happens to be tinyTIMMAH’s favorite GPK character. 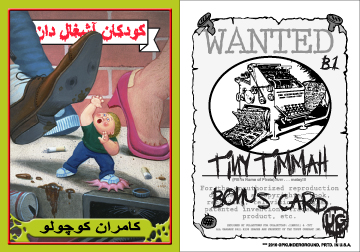 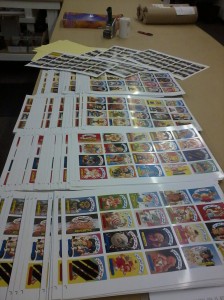 The Farsi GPK Cards were cut on a Challenge “Champion” 305 cutting machine. 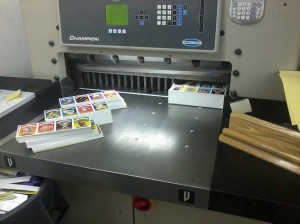 There were 10 P1 promo cards printed to test color, resolution, stock, etc.  The P1 cards were printed on a card stock that was more like plastic than paper.  The plastic stock was not suitable for the Farsi Garbage Pail Kids set as the images came out very pixelated.  The decision was made to print the cards on Kromekote 12pt C1S cover paper. 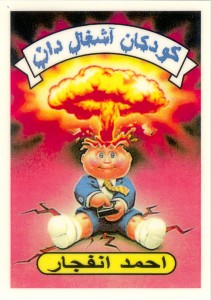 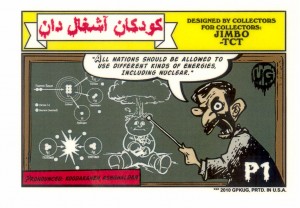